DESPITE A FAMOUS NAME, 12 YEARS ON STATEWIDE SLATE AND
$100 MILLION IN DIRTY PAY TO PLAY CAMPAIGN SPENDING

Poughkeepsie, New York – Today’s Siena poll finally shows what internal polling has been throughout the campaign, Andrew Cuomo’s corruption has made him deeply unpopular with New Yorkers and he can’t crack 50%.
With 48 hours till Election Day, the poll shows the race within 13%, while Molinaro internal polls show it closer to a 6% gap.  Today’s poll also echos polling from 1994 that predicted Mario Cuomo would win by double digits. 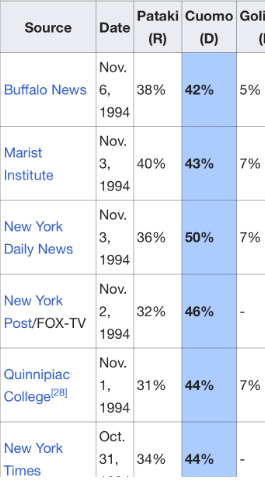 The fact is Andrew Cuomo is stuck under 50% and this is huge opportunity for the Molinaro campaign.  As Mike Bloomberg’s campaign manager Bradley Tusk writes in his book “The Fixer,” regarding polling illiteracy,
“Mike was always up by around 15 in every public poll, the margin was something like 50-33. ‘Reporters would always look at it and say Bloomberg is up by 17 he is miles ahead.  In reality this was a huge problem. We couldn’t get past 50 percent in our own polling, regardless of how many ads we ran or doors we knocked on. And after 8 years in office $150 million spent the undecideds really aren’t undecided. If you weren’t for us at that point you aren’t going to be.”
With two days before the Election – the race is up for grabs.